Grantland: Is Bill Self a Second-Tier Active Coach?

Share All sharing options for: Grantland: Is Bill Self a Second-Tier Active Coach?

Kentucky Sports Radio founder Matt Jones wrote an article for Grantland discussing Kentucky's National Title hopes this week in a series looking at the top five contenders. Most of the article is very insightful. But one point caught my eye in a big way: "[Calipari] knows that he is as good as or better than others in the coaching elite and that his résumé should certainly be considered greater than that of lesser coaches with national titles, like Bill Self, Billy Donovan, and Tubby Smith."

Is Jones implying that John Calipari's resume is that much better than Bill Self? Because looking at facts, they're very similar (with one glaring omission). Jones includes Mike Krzyzewski, Roy Williams, Tom Izzo, Jim Boeheim and Jim Calhoun in the top tier. I think there's an argument that Self has coached better than Boeheim, and Izzo and Self aren't irreconcilably separated either (nor for that matter are Boeheim, Izzo and Calipari). Coach K and Calhoun are probably tops with seven National Championships between them, though Calhoun's lack of consistency over the years makes his legacy a little harder to pin down. Regardless, let's get back to Bill Self and John Calipari.

We'll look at the numbers after the jump...

From StatSheet.com, here are the basic statistics from both coaches. 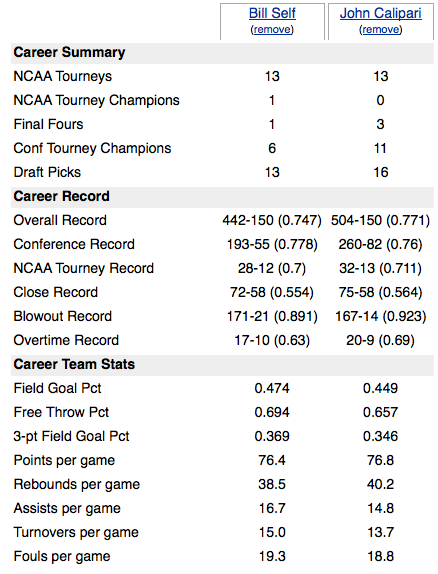 The biggest difference you'll see are the conference tournament championships, which Calipari dominates. However, nine of Calipari's championships didn't come in a BCS conference. No offense to the A-10 or Conference USA, but neither conference is as strong as the Big Ten or the Big 12. Self on the other hand had all six conference tournament championships come in BCS conferences (two in the Big 10 and four in the Big 12). Additionally Self and Calipari have an equal number of regular season conference titles (eleven). The bottom line is, with regards to regular season play, Bill Self's teams have outperformed John Calipari's. Now the other glaring difference is Final Fours (three to one). But looking at their relative NCAA Tournament winning percentages should tell you that the coaching resumes aren't that different (even if Kansas has a recent tendency to get upset). 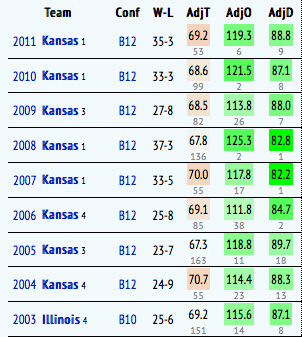 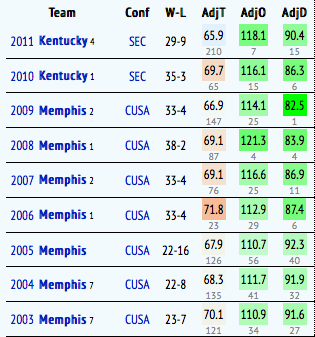 Bill Self's combined statistics are better in all but two years (2006 and 2009). He also has a national title (where he beat Calipari head-to-head, which I wasn't going to mention because of small sample size, but still). Don't get me wrong: Calipari's a great coach, but I'm not seeing "his resume should certainly be considered better than that of lesser coaches with national titles" like Self, but I'm happy to hear concrete arguments.