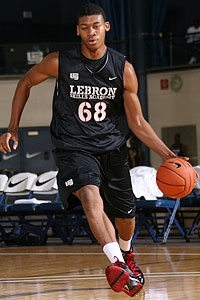 Reports are starting to filter in on why 5-star recruit Tony Mitchell has reportedly enrolled at the University of North Texas instead of Missouri, where he had signed a letter of intent to play for the Tigers.

Apparently Mitchell did not qualify under NCAA guidelines and therefore is not permitted to play or practice with a Division One NCAA basketball program. He is permitted to enroll in any school -- provided he meets the school's admission requirements -- and if proven that he is working his way towards graduation, then he can be reinstated by the NCAA in a year.

Mitchell also must either pay his own way for school, or receive a needs based scholarship. He is not entitled to an athletic scholarship.

So what does this mean?
In a perfect world for Mizzou fans, Mitchell will work towards attaining a degree at North Texas and reapply to the NCAA next year in order to be eligible to play. If granted eligibility, Mitchell could transfer to a different school, presumably Mizzou, and have three years of eligibility remaining.

He is not permitted to play or practice with the Mean Green, so choosing North Texas was probably more for proximity to his family in Dallas and the cost of their in-state tuition, as opposed to paying out-of-state at a different school. Big 12 guidelines also prohibit Mitchell from enrolling at Mizzou, since a requirement of the conference is that any student at a Big 12 institution must also meet NCAA qualifying entrance requirements.

So for now the book is closed on Mitchell for this season. One might speculate that after the academic year he will investigate declaring for the NBA draft, but that is all to be determined at a later date.